Welcome to my new site. It’s a personal blog: I’ve got rather a lot I want to say, so this is where I’m going to try to say it. It’s hard to distill any clear theme, other than that I’d like everyone to live happy, healthy and fulfilling lives, so I’m going to write about topics that hopefully work to bring that about. Education and childhood are probably the topics I know best, so that’s where I’m going to start.

I also like drawing, so I’m going to experiment with adding illustrations and comics to the posts. Actually the word “experiment” probably applies to this whole endeavor: I can’t even decide what language to post in – even this English translation (of this original Japanese-language post) is experimental. I’d like to share my thoughts in English, but my focus is Japanese (to develop my ability, and because I live in Japan) and having to write everything twice is somewhat onerous. We’ll see how it goes….

Since this is my first post, I’m going introduce myself. I’m from England, and came to Okinawa in 1998 after a year on the Japanese mainland. I spent eight years as an Assistant Language Teacher (originally on the JET programme, now I have JETlag…) which involved teaching communication-based lessons in elementary and junior high schools. I enjoyed this so much that I wrote a book about it which you can buy here. Nowadays I’m an part-time lecturer at four schools on the island: Okinawa University, Okinawa International University, Okinawa Christian University, and Okinawa Language Center. I’ve also worked at several democratic schools.

I live with my wife and two children, who may well feature in this blog so I’m going to introduce them too:

“Wonderwife” is Okinawan, and three years younger than me. She’s cheerful and positive and funny, and as such is very forgiving of my various foibles, for which I am eternally grateful.

“Boo” is six years old, loves making things (in real life and in Minecraft) and rarely stops talking…just like his dad.

By contrast “Gwiddles” (AKA “Gwiddling” AKA “The Gwiddler”) at four and a half still can’t actually talk (certainly not with any grammar). She has WonderWife a little worried that she may never learn human language, though I’m confident she’s just a late developer – I’m more worried about what she’s going to say once she finally does decide to learn to talk like the rest of us. 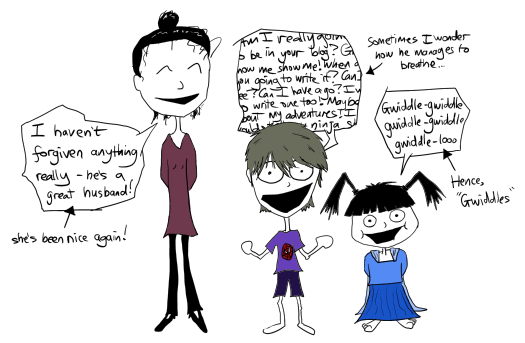 (translating the drawings from Japanese is also a bit of a task, again, we’ll see how it goes…)

Most of our weekends are spent playing in various parks and beaches around the island. When I can sneak a little freedom I go surfing.  And now I have a blog to keep me busy….

That’s all I have to say for now.  There might be more English-language posts coming soon, but in the meantime thanks for stopping by.