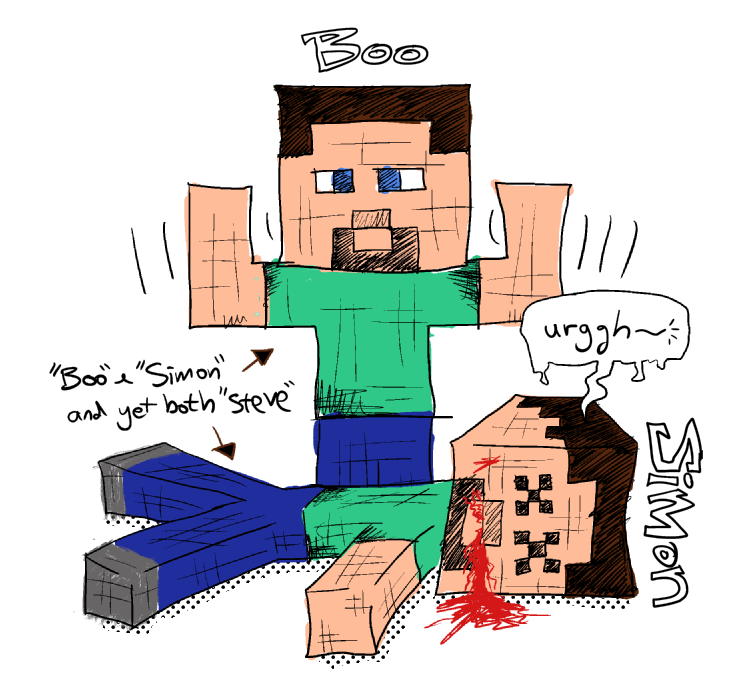 For his birthday in January 2015 Boo decided he wanted Minecraft. In case you don’t know it, I’ll briefly explain: Minecraft is a computer game where you (along with other players) run around freely in a 3D world , building things and exploring – kind of like Lego if you and your friends could be the little Lego men and had an infinite number of blocks to play with (and an infinitely large bedroom). It’s a creative game that I was also really interested in playing, and once I installed it on our tablets we played together for at least a couple of hours every day.

Firstly we worked together – we dug a hole to hide from the creatures that roam at night, and then started expanding that simple hole until it had a basement, a glass wall to give a view of the sunset, and a huge tower – we’d built ourselves a castle! From then however, we started to play more separately, still within the same world. I wanted more challenges – I dug down until I found some caves to explore, made myself some steel weapons and armor with the iron ore I found down there, and then started to roam the landscape killing things for the materials they dropped (e.g. killing a spider gets you silk string for a bow and arrow).

However Boo was very nervous of the creatures, and so preferred to stay in our castle. He’s always been a very cautious child, and this was as true in Minecraft as it was in real life. While I went out exploring, he spent his time inside turning the materials I bought back into weapons, armor and tools (chests full of them, far more than we could ever hope to use…).

After a couple of months of regular play, I’d basically conquered most of the major challenges, and I started to lose interest – I returned to my previous evening routine of helping with the cooking and washing up (much to Wonderwife’s relief…). Boo also moved on to other things, though he continued to come back to Minecraft at regular intervals.

And then the other day Boo wanted to play Minecraft together again. “Let’s do boxing!”

“Boxing?” I replied, which turned out to be a voxelated version of Fight Club: no weapons or armor, we just pound each other with our bare fists until one of us dies. It sounded straightforward (and I rather fancy myself as Tyler Durdan….) so we squared off.

Me: “Eh? Hey, I died already!” It’d been a while since I’d played and I was a bit rusty with the controls. Respawn.

Mere moments pass, and then:

Me: “Huh? I’m dead again!” Thinks to self: Come on Simon, get it together! You’re Brad Pitt, not Edward Norton….Respawn.

What’s going on? Why can’t I beat Boo? It’s just a simple task, get him in the middle of the screen and repeatedly tap his character until he falls down – how come I’m getting killed every time?

Me: (somewhat relieved) “Ok, that sounds good, but the sun’s getting low, shouldn’t we make a safe place to hide?”

And two minutes later I was again taken aback – I’d barely collected some wood when he handed me a suit of leather armor and a stone sword. How had he made them so quickly? (um, thinking about it now, maybe all that practice making chestfuls of weapons?)

So in the fading twilight we set off through the grasslands, and soon stumbled across a Creeper, a dangerous enemy that explodes once it gets close enough. I panicked and tried to retreat, but Boo just charged straight up to it and killed it before it even had a chance to explode. Zombies came at us next, but while I struggled to defeat the one that came at me, Boo dispatched two of his own and then to my relief finished mine off too.

And at this point I finally realized what was going on. It wasn’t that I hadn’t played in a while at all. Boo was simply now much much better at this than me. Not only that, but his “carefully carefully” personality had been completely transformed. He now wasn’t scared at all, and with good reason – he knew he could kill the enemies with ease.

And this is something he could only really experience in a game. In the real world, he’s still just a small boy: he doesn’t yet have the strength, coordination or dexterity to experience mastery (which is why the cry of “Daaad! Help!” echoes around the house at least once per evening). But in the game world, that handicap completely evaporates: he can experience mastery. And having experienced it in the game, he’ll be looking to experience it in real life too.  From playing games, he’ll learn not just confidence in his ability to play games, but confidence in his ability to do anything. He’s just had an early conscious experience of the depth of skill that devoted practice can bring – how could this not spill over into the other areas of his life? (‘Conscious’ because unlike learning to walk and talk, this time he is able to be much more aware of the process unfolding).

As adults we often worry that our children, immersed in games, are missing out on opportunities to learn about the real world, but from this experience I’ve started to see how games function to accelerate children’s development: expanding their horizons, showing them new possibilities, and developing their confidence and sense of themselves in ways they simply can’t yet experience in the physical world. Who knows what a cognitive and emotional advantage this early “leg-up” will give them?

This must be why children become so immersed in games: not because they are in some way “addicted” (a topic I’ll come back to in a later post) but because they find real value in the challenges the games present. As adults we’d do well to respect and trust our children’s inbuilt instincts for learning, looking to see what value they are finding even in activities we find perplexing. For myself, I’ve stopped worrying about time spent playing games and started to see how they allow children to actually experience worlds, situations and competencies that as a child I could only dream about.

“Computer Games: an early experience of competence and confidence” への2件の返信